Back again, with some St. Patrick's gold

This week, I'm working on a column about the local vinyl record store, which occupies an old skating rink that turns out to have been constructed using timbers from the old L&N train station in Century, Florida, where I grew up. I'll link to that this weekend. (Dad asked me to write a guest column for the Historical Society about the place also. -- And speaking of that, I've been invited to the April 24 spring celebration in Century, where I hope to sell a few books, maybe.)

Currently reading: DC Showcase Presents "House of Secrets" -- loaned to me by my friend Brady. He also recently loaned me the Showcase collection of the Warlord series by Mike Grell. I'll tell you more later and provide some links.

Just watched: "The Time Traveler's Wife" on DVD. Loved the book. The movie touched me too. I'll give a deeper review in the neat future.

Be back soon, I promise.
Peace.
Posted by Unknown at 9:42 PM No comments: Links to this post

I'm currently reading The Colony, written by Jillian Weise, who used to write a student column in The News Herald's Education section, many moons ago. She's now a poet, playwright, novelist and a professor at Clemson. I plan to write more about her debut novel later. For now, I thought I'd share something I wrote in February 2006 when she released a collection of her poems. It ran with this headline:


I read her Notes on the Body, and can’t help recalling the middle-schooler who so bravely approached me — What? 11 years ago? — about writing columns. I read The Amputee’s Guide to Sex, and there’s a high-schooler posing questions to then-Gov. Lawton Chiles. Having not seen her for some time, those are the images with which I live.

I’ve heard that some have a problem reading fiction by people they know: They imagine the friend in the process of writing, or living it, and can’t buy in. That’s not my reaction here. Reading her work, moments so quietly not fictional, I buy in, and there lies the discomfort.

(Forgive me, Jillian. I’ll be brave.)

Jillian's first chapbook, Translating the Body (All Nations Press, 2005) was a precursor to the full-length edition, The Amputee’s Guide to Sex, coming this fall (Soft Skull Press). I read it recently when her father dropped me a copy, and I looked her up online.

“I’m intrigued by H.D.’s (Hilda Doolittle’s) question in Notes On Thought and Vision: ‘What is the body? Where does the body come in?’ My work seeks answers for these questions,” Jillian said in a recent e-mail exchange.

“As an aside … I am alarmed by the current climate towards physical difference. Million Dollar Baby and The Sea Inside both garnered Oscar nods in the same year. Both movies portray characters living with a disability who choose to end their lives. The movies appeared to large audiences in a year when stem cell research was hotly debated in a presidential campaign. While the poems I write are not about movies or presidents, they do argue for the validity and worth of living with a disability.” 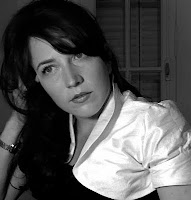 Is she a hero? She may be. I once described her in print as the kind of kid who got an idea and made it happen, the girl who invited the boy of her choice to the prom, who embraced theater and public speaking “despite” physical challenges that would sideline others — a bone displacement disorder, severe scoliosis, a bad lung, marathon surgeries, metal rods, a leg amputation in childhood.
(Now one of her poems that crushes me in retrospect, I discover, was based upon that terrible word: Despite.)

As a Surfside and Rutherford student living in Panama City Beach, Jillian wrote regularly for The News Herald’s now-defunct Education and Generation NeXt sections. She’s now 24 and on a second-year fellowship at the Fine Arts Work Center in Provincetown, Mass., on Cape Cod. (“Brrr,” she said.)

“I live on the third floor of an 1880s barn with a concrete seagull named Hoot,” she said. “The property used to house a paper mill until the 1960s, when a collective of artists purchased the land and surrounding buildings and created the Fine Arts Work Center. The FAWC is a non-profit arts organization that selects 10 visual artists and 10 writers a year from around the world to come and live rent-free with a monthly stipend. Our only obligation is to write or make art.”

Jillian recently worked as an editorial assistant at the Paris Review — reading submissions, scanning for talent and helping to “birth an issue.” Her plays have been produced at the Greensboro Fringe Festival and Provincetown Playwrights Festival, and her poems have appeared in The Atlantic Monthly, Tin House, Verse Daily and elsewhere. She earned an MFA as the Fred Chappell Fellow at the University of North Carolina.


With Jason Matson — whom she met while both were students in Tallahassee and who moved with her to the Cape — she’s half of The Leaving, formerly The Jason & Jillian Band. According to her MySpace profile, she’d like to meet “people who drink sweet Alabama wine on ice in the winter.” She flosses her teeth.

And she writes unflinchingly about the pains and the freedom, the limitations and the pleasures of being who she is. Her voice is clear, nothing is lost.

A hero? Maybe she’s just a girl I’m glad I used to know.

Peace.
Posted by Unknown at 1:55 PM No comments: Links to this post