REVIEW: 'Jonah Hex: No Way Back' 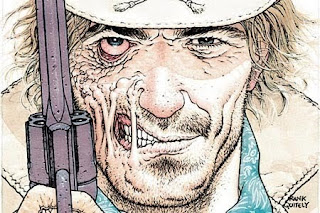 It may be Jonah Hex’s summer.

Sure, there are more famous (and better looking) comic book heroes hitting the multiplex screen, and there are better selling comics on the stands, but for a character who is little known beyond a niche population of comic readers, summer 2010 is a milestone.

Warner Bros. Pictures will release the first movie adaptation of “Jonah Hex” on June 18, starring Josh Brolin, Megan Fox and John Malkovich. And while the character has shown up as a guest star in various DC Comics-based cartoons over the years, he will feature in his own short animated film included in the upcoming DVD movie release “Batman: Under the Red Hood” in July.

Meanwhile, DC releases “Jonah Hex: No Way Back” this week — the first original graphic novel based on the 40-year-old character. “No Way Back” was produced by the longtime Hex team of writers Justin Gray and Jimmy Palimiotti, with artist Tony DeZuniga (who co-created the character with writer John Albano in 1971).

“Jonah is one of the coolest and most unique characters we have ever had the pleasure to work on,” Palmiotti said in promotional materials for the book. “He’s an icon and his untamed manner appeals, on a visceral gut level, to just about everyone who reads it.”

Guided by a strong moral code, but about as ornery as a hornet’s nest, Hex is a former Confederate army soldier who makes his living as a bounty hunter. His face was scarred and melted by angry Kiowa tribesmen to punish him for an affront of which he was innocent.

Whereas the trailer for the upcoming movie hints that Hex has the power to talk to the dead, “No Way Back” sticks to the character’s hell-raising Wild West roots, allowing readers to discover how Hex’s early years helped make him into a “justice-thirsty vigilante.” He’s got mom and dad issues, both of which catch up to him in terrible ways in this story.

“We unleash the beast like you have never seen before,” Palmiotti said.

Indeed, the graphic novel is a raw thing — brutally violent, alternately heartbreaking and stomach-churning. The plot would translate easily into a Clint Eastwood-style spaghetti western: Hex tracks down his dying mother, who left him at age 10 to be raised by an abusive father; he learns he has a half-brother, whose pacifistic town needs protection from murderous and rapacious bandits who have nipped at Hex’s spurs for years.

“Bold, brazen, violent and surprisingly tender, this is the consummate tale of the Wild West’s greatest bounty hunter,” Gray said.

The tale is well told, but for once the art is disappointing. DeZuniga has always tended toward a rough style for Hex — sometimes producing detailed panels reminiscent of woodblock prints. But here, the drawings are crude, almost sketchy or rushed. It’s difficult to distinguish between some characters, and action sequences are awkward. Perspective is missing, with vistas coming off flat and foreground/background characters the same size.

That being said, the package is worth the ticket price. The revelations and tribulations Hex confronts make for a compelling stand-alone story, and it comes in a book with the look and feel of distressed leather, printed in full color on high quality paper.

‘Jonah Hex: No Way Back’

Note: This column was written for The News Herald's Entertainer section.
Posted by Unknown at 3:05 PM No comments: Links to this post

I Put a Spell on You

And now, you're mine.

I just received a review copy of the book you see to the left: The first original graphic novel based on the DC Comics western character, Jonah Hex. There's a Jonah Hex movie coming out soon, starring Josh Brolin as the scarred bounty hunter. I understand they've given him supernatural powers in the movie, so he can talk to dead folk. Not sure I like that, as it breaks with Hex's storyline. But whatever. I will let you know what I think of the book very soon. Meanwhile, check out this video of the movie trailer:

Posted by Unknown at 2:32 PM No comments: Links to this post

I thought I was soooooooooo original.
Did I ever tell you the story of how the title "It's Always Midnight on Mars" came about? It was a discussion of the editorial leadership team. Our editor of the time was asking about datelines and time (since we serve cities in both the central and eastern time zones). He asked if we ought to be giving times in our reports in both zones. Claude Duncan, the late and great editorial writer and essayist, asked him "What about Mars?" He had been talking about the rovers up yonder that were at the time in the headlines. When we reported something they were up to, he asked, shouldn't we give the Mars local time? "What time is it on mars right now?" he asked. "It's always midnight on Mars," I said. Later, when I retold the story over some burgers at Coram's, I remarked how that sounded like the title of a Ray Bradbury tale. I decided to write that tale, and it ended up being incorporated into my novel.

Since then, I've used midnightonmars as my Twitter handle and MidnightOnMars as the name of my Etsy store. It's also the handle I used when creating my Myspace, way back in the pre-Facebook era, and when Facebook offered URLs, it's the one I chose.

But the name is also out there in the collective unconscious, and it has been cropping up all over the place. Just do a quick Google search and you'll find all of these. A few to consider:

I love the concept of this graphic novel, and would like to see more. I wish I had had the foresight to purchase that URL.

This photo is also pretty cool: 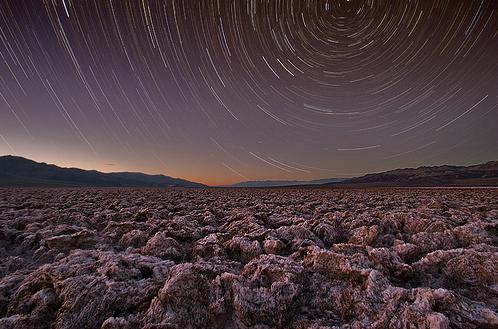 It's title is "Midnight On Mars." I stole it from here. The Photographer is Shamik Ganguly.

There's even a piece of music by that title.

I'm not sure what my point is, unless it is that maybe I was onto something. Something the rest of the world was onto as well. Maybe sometimes there really is such a thing as "an idea whose time has come."

What time would that be?

Peace.
Posted by Unknown at 10:26 PM No comments: Links to this post

I mentioned in an earlier post that I would be visiting Century to participate in Sawmill Day and (with any luck) sell some books. The luck was not so good. It rained, off and on, and the crowd was light. Few books were sold. But I got to see lots of family and a few old friends I seldom see, so I'm counting it as a win.

Here's a column I wrote about the day for The News Herald (with a few photos).

I spent some time yesterday in a waiting room as my wife had some "procedures" (she came out okay). And read several chapters of a recent entry in Simon Greene's "Nightside" series, "Just Another Judgment Day." I really enjoy this series, which is heavy on surreal elements, snarky humor, references to other writers' work (this one has him run into an alternate version of Moorcock's "Eternal Champion" whom he called the "Fractured Protagonist"). He also stops Dr. Frankenstein's latest creation, and that's all in the first few chapters. Spooky good fun.

Finally, I'd like to bid farewell to Frank Frazetta, whose art graced the covers of many a book, magazine, comic, or movie poster of my youth. His work gave Conan form beyond the imagination, and brought the creatures of Pellucidar and John Carter's Mars to life. Here's an appreciation page from the LA Times. 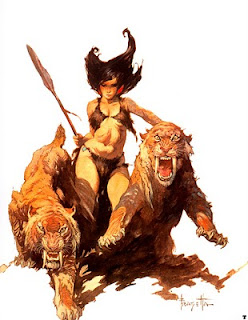 Posted by Unknown at 2:20 PM No comments: Links to this post

We moved Nathan out of his apartment last weekend, and it has taken a few days to recover. This weekend, we hope to get out the beach before the oil reaches us.

I found "Trainsong" in the bargain bin at UWF when I was last a student there, in 1992-93. I was in a class that had "On the Road" as one of the texts, so I was steeped in Kerouac at the time. Odd that I should run across another copy in another bargain bin a couple of days after moving my son away from the front gates of UWF.

I highly recommend "On the Road," (and I recall that my sister didn't understand the ongoing fascination of the novel). Jan (who died in 1996 of kidney failure) was not the writer her father was, but her similarly "autobiographical novels" movingly explored her deep and abiding search for a father figure. I recommend it too.

Posted by Unknown at 1:03 PM No comments: Links to this post