DC Comics sends me preview/review materials from time to time, and when I like something I write about it. Recently, DC sent me copies of Superman No. 700 and Wonder Woman No. 600. (Those numbers supposedly reflect the number of times their comics have published since their inception, because both of them have had relaunches over the years and their current series are far from the double-naughts shown.) Both issues are "event" issues, good jumping-on points for people who don't normally read their books. I'd be amazed if such a thing actually worked; that is, that regular monthly readership significantly increased beyond the special issues, even though both of them herald a "bold, new" direction for their titular stars.

That's because I find the "bold, new" directions kind of lame and old instead. 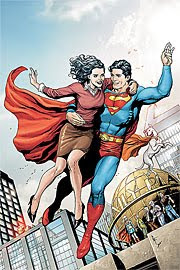 In Superman's book, the Man of Steel has been off-planet for a while saving the universe. He comes back to earth and during a press conference or something a woman slaps him in the face and blames him for not being on Earth when her husband was dying of a brain tumor. She seems to think a guy who has a journalism degree from Metropolis U could have used his X-ray vision and heat vision to perform surgery. Okay, so he's pretty smart, but let's face it: Superman is no brain surgeon. Anyway, her anger guilts him into thinking that maybe he doesn't spend enough time among the little people, so he decides to walk across America and get back in touch with folks on the ground.

OK, I'll buy that. Could make for interesting stories, I guess. I mean, it worked for several seasons of The Incredible Hulk. And it even worked for a 12-issue mini series called "Midnight Nation" written by J. Michael Straczinski (of Babylon 5) back in the 1990s. The same guy who's writing this 12-issue arc of Superman. So, the idea is neither bold nor new, not for the writer or the reader. Add to this, however, the fact that DC is promoting this "epic" by asking people to write a short essay to enter their hometowns in a contest: Superman could visit YOUR TOWN during his journey. Small print: Any town within 50 miles of a handful of specific major cities is eligible, and NONE of those cities is a Southern state. So, apparently, Superman loves the USA so long as its north of the Mason-Dixon or west of Texas.

I would think DC could find something for Supes to do along the Gulf Coast this year. He could at least get into an argument with Aquaman somewhere out among the oil soaked beaches. Or maybe he could walk through Oklahoma City; this is, after all, the 15th anniversary year of the bombing there. But no, he'll go to Denver, Las Vegas, Seattle, and so on. 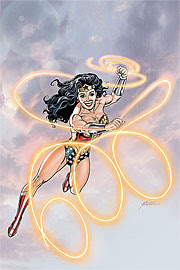 Diana Prince, who was enough of a feminist icon to be featured on the cover of Ms. Magazine back in the day, is now considered more up-to-date by putting her in black pants, a red bustier, and a tiny Members Only jacket (see below). Loads of geek sites have had their say, and many poked fun listing all the ways this is NOT a costume for today (hit all those links for examples), as it went out of style in comics back in the 1990s. And I have to ask you: If they dressed Superman in black pants and a red shirt and a blue jacket, would you recognize him? I'm thinking this is a way to establish a costume that will translate to a "serious" movie, much as they took Wolverine out of his yellow Spandex and put him in black leather for the X-men films.

So yeah, sometimes it ain't easy to be a DC fanboy. But then, it's not like I was buying either of these comics anyway. 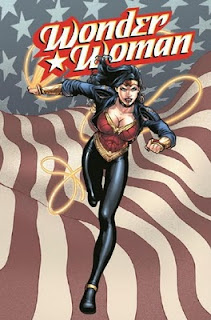 Of the two issues they provided, I enjoyed the WW better. Both had three short storylines written and illustrated by creators with a tie to the characters, but whereas the Superman issue seemed more of a disjointed hodgepodge used to fill space ("Gosh, we have a special issue coming up; what do we have sitting around that we could shove into it?") the WW issue had super-special all over it, with several full-page mini-posters by some of the best artists in the business, stories that tied loose ends in the Amazon's ongoing continuity, and a strange lead-in to the "altered time line" that gives us the all-new, less powerful, "I don't know who I am" cliche of a super heroine. Yeah, the final third of the book leaves me cynical and cold, but that opening sequence by George Perez is pretty cool.

Here's a preview of Superman 700 in case you're interested (pdf format).

Here's a preview of Wonder Woman 600 (also a pdf) but it doesn't get to the new costume/alternative history.

And just for chuckles, here's a preview of Batman 700, which I have not read and can't comment on.

Thus ends the rant. For now.
Got any thoughts? Preferences? Read any good comics lately?

I haven't read my WW #600 yet, but i'm looking forward to it. There were quite a number of creators on there that I really enjoy. Still not sure how I feel about the costume change, but then I again, I still haven't gotten over the Brand New Day Spider-man reboot either. I guess when you grow up with these heroes it's hard to remember that their are new fans out there and they don't have the tie to the characters, so sometimes in order to please those new people, editors change things or reboot things. It's hard on us long time fans, but the industry must do what it must do to survive, i guess.