Connecting across time and space

(The following was my Sunday 'Undercurrents' column for The News Herald.) 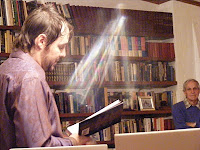 Surrounded and bolstered by kindred spirits on Thursday night, Wewahitchka-based author Michael Lister talked about the sacred calling of the storyteller. He used the word “shaman” to convey the mystical connection between the teller and the listener.

Like an alchemical equation seeking balance, the work birthed in the act of creating art can’t reach maturity until the work is interpreted. Otherwise creation is the silence in the forest when a tree falls and no one is there to hear it.

It’s the sound of one hand clapping.

Michael’s words, as usual, started me thinking. In particular, I recalled a few events of the past week where the things people said (or wrote) and the things I heard (or read) connected with memory to create new meaning. You never know what people will say, or how the things they say will stick with you and bubble to the surface of your thoughts.

A couple of examples:

I visited the set of “A Doll’s House” on the Amelia Center Theater stage at Gulf Coast Community College this week. Decorated for Christmas, the lights and baubles stood in stark contrast to the dull walls and furnishings in shades of brown. It looked like a scene out of “A Christmas Story.”

The play is set in 1950s Chicago, and the short sequence I viewed made me think about those folks on our Squall Line who want their country back — one of whom even went so far this week to type on his or her computer that “The 1950s was a better time.”

On stage, the husband teased his wife with $10 bills that she greedily snatched from him, one by one, and promised to spend wisely. He called her pet names and spoke in soothing tones, making sure she understood her place and function in his world.

I was reminded of an early Saturday morning recently, when an older man joked about spending his entire “allowance” on yard sales. He circled among some tables stacked with colorful trinkets and clothing, asking silly questions and flirting with the ladies at the sale. Suddenly, he grew quiet.

He cleared a lump in his throat and pointed at a coffee maker designed for one person. “Is that real or a toy?” he said, and I told him I believed that it was real. He bought it and drove away alone.