Forget the Mayan calendar, my calendar ends on Saturday! 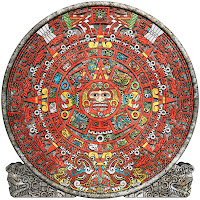 PANAMA CITY — I don’t want to alarm anyone, but the end of the world may be closer than you think.
I mean, I’m pretty sure everyone on the planet is familiar by now with the ancient Mayan calendar or has at least heard of it. I don’t use it every day, or ever, but apparently the ancient Mayans were really good calendarians, or whatever, and they ended their desk calendars on Dec. 21, 2012.

The word on the street is that the ancient Mayans believed that date marked the end of one cycle of the world. I Googled that to be sure. I saw it on the Internet, so I’m certain it’s accurate.

Here’s the thing: The ancient Mayan calendar may end on Dec. 21, 2012, but the calendar on my desk ends Dec. 31, 2011 — which is only a couple more days away! I’m afraid that MVW Consumer & Office Products Inc. of Sydney, N.Y., might know something the ancient Mayans didn’t know.

I haven’t called them to ask, or anything. I just jumped straight to the panic.

I suppose the ancient Mayans were way smart, but they still ate each other’s hearts, so it’s not like you could really trust them. And as far as I know, no one at MVW Consumer & Office Products Inc. ever ate anyone’s heart. I think that’s even illegal in New York.

I haven’t called to ask them about that either. I’m afraid to. When I Googled “Is eating human hearts from live sacrifices illegal in New York?” the Internet showed me entries on cannibalism, infanticide and the “most common questions asked by non-Muslims.” (I am not even kidding about that part.)

Excuse me. I have just been informed that we have additional desk calendars for 2012. They even go to Dec. 31 of that year. Apparently, MVW Consumer & Office Products Inc. printed more and the world is NOT, in fact, coming to an end on Saturday. The nice people in the white suits tell me that more calendars are EVEN NOW being made for 2013.

You’ll notice the ancient Mayans aren’t making new calendars. (You may have noticed by now that I use the term “ancient” when referring to the Mayans so as not to offend so-called “modern” Mayans, about 10 million of them, who are looking to cash in on end-of-the-world tourism next year.)

I suspect the ancient Mayans were just being lazy and didn’t want to have to chisel a whole new calendar in another stone. That stuff isn’t easy to do. You can get bad finger cramps.

Or maybe all that eating each other’s hearts made them lazy, and it was just coincidence that they designed their calendars to be recyclable every eon or so.

Smarty pants ancient Mayans with your calendars that end on Dec. 21. Eat your heart out: My new calendar goes 10 days longer.

So, you know, never mind what I was saying before. Carry on with whatever you were doing. I’m sure 2012 will be fine.

(Link to a NASA FAQ about 2012 rumors and myths.)
BTW, That image above? That's an Aztec calendar. It's not even Mayan. That's how little I care about the end of the world.