So far, April is the coolest month

T.S. Eliot would have us believe that April is the cruelest month. I would argue that, despite the illnesses visited on the family this month. So far, April has been a pretty good one, all things considered. 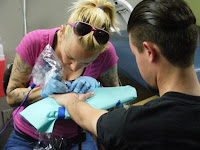 … Hovered over a man getting tattoos at a local shop in order to shoot video of the process. The artist asked me if I had any tattoos (I don’t) and if I ever considered getting one (I have). If I ever lose my wedding ring again, I’ll probably get one tattooed to my finger.

It would hurt, I’m assured, but my wife is OK with that. 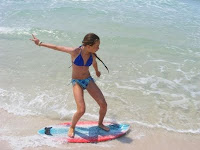 … Took off my shoes and socks, and rolled up my pants legs so I could wade in the surf and take photos of skimboarders along the shoreline behind Sharky’s. One young skimmer’s dad told me how he and his friends made their own boards when they were kids: cut out a shape in plywood; soak the wood in water, place it on blocks with a heavy block in the middle to bend it, and let it dry; coat it in varnish.

You could see the past come alive in his eyes when he watched his daughter skimming.

… Had lunch at Bayou Joe’s with a couple of writer friends. We talked about craft and our experiences at bookish events while boats docked and diners filled the tables. A group of women asked me to take their photo, and I backed to the edge of the dock to try to fit the whole table in the frame.

“Just take one more step back,” one of them suggested. 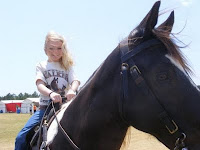 … Patted the hide of a pony as a trainer led it out on the grass at Frank Brown Park. Then I shook a 10-year-old’s hand and listened to her talk about competitive riding. She double-looped the reins in her tiny hands and slipped her flip-flops into stirrups.

What she really wanted to do, she said, was visit the beach.

… Talked to the only female at a collectible card tournament held at a local comic book emporium. Most of the boys were too shy — or distrustful of outsiders — to allow an interview. It was April Fools Day, but you wouldn’t know it from watching the games unfold. Or maybe there was a meta-level meaning there that I overlooked. 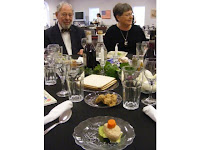 … Crashed a party at the Temple B’nai Israel in Panama City. (Not really; a couple of the organizers expected me.) Tables were arranged with the good dishes, and plates were set aside for the traditional lamb shank, bitter herbs, egg and other symbolic foods for the Seder celebration.

I hugged a man who was wearing a yarmulke, and that’s not something you get to do every day.

---
(This was my Undercurrents column for The News Herald on Sunday.)
Posted by Unknown at 11:53 AM