(The following was my Undercurrents column for Dec. 23, 2007.)
So I turned to blog readers this week for some help. A typical husband, I was beginning to get nervous about the approaching holiday deadline, considering the fact I hadn’t yet bought anything for my long-suffering spouse. I expected to be frantic in the aisles of Bay County’s retail stores before the weekend arrived.

(Universities actually have done studies of this phenomenon. I looked it up on the Internet, so it must be true. They found that women are just as likely to be in checkout lanes on Dec. 24 as men are. However, women are more likely to be buying that little something extra to make their giftgiving that much more special, while men are just getting starting and have no idea where to begin.)

And whose fault was it other than mine? My wife’s, of course. I blame her. It’s for her that I’m shopping, after all, and it’s difficult for a man to go into a store without a target in sight.

I mean, I can put you together a list of stuff to purchase for me in various price ranges at a moment’s notice. I’m shallow and materialistic like that.

But all the wife ever says when I ask her what she’d like for Christmas is mushy stuff. Relationship stuff. Huggy-kissy-snuggly stuff. Stuff you can’t really stuff in a stocking, you know, or take back to the store for a refund later when you change your mind.

So I asked, “What is it with women? What do women want?”

Robbyn responded that I should buy her an event: a theater or symphony performance, art, a class, a dinner cruise with dancing. “… The sweet thought, coupled with spending time with you (and knowing you wanted to spend time with her) will score you big points!”

Tina suggested having a star named after her at starregistry.com, or using our personal inside jokes as a starting point for a special present. “Yes, women are difficult to buy for. We don’t just want stuff. Women want a summation of your feelings in a box with a bow.”

And Bob suggested something by Bob Dylan. (I suspect Bob is less successful with women than I am.) 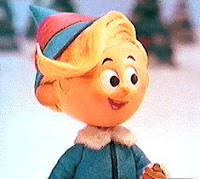 Finally, my dentist suggested I visit Victoria’s Secret. He also said the first thing to do once inside the store is find a clerk to assist me. Otherwise, I’m liable to get some funny looks if I just browse around. (Dentists are especially reliable regarding Christmas advice; remember, Hermey the misfit elf became a dentist.)

I hope this was as helpful to you as it was to me.

The top gifts I have gotten my wife:

Turned the house into a poem, each word on a separate piece of paper with a drawing.

Cut cardboard out and made a floating poem for her.

Turned the driveway into a portrait of my wife when it snowed.

Turned the house into vegas, she was home sick. Christmas lights, a show, drinks and home cooked meals.

I bought her all the seasons of Sex and the City. I got major bonus points there.

I proposed to her again, putting her name up on a movie screen. It was on opening weekend for Eclipse. Bonus points again.

She loved the tickets to see her mom, or fly her mom down. You can never go wrong, flying them or someone else somewhere.

Made her bouquets of paper roses with poetry inside.

There are plenty of good ideas out there. Those are only a few. That is what happens when you marry a hopeless romantic.