'Salvage Santa' does what needs to be done 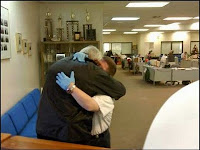 But then district security chief Mike Jones, aka “Salvage Santa,” stopped by the office Friday to see one of his fans, Byron Smith. Byron’s mom works in the district office Mike protected from a gunman Tuesday, and she had told Mike that Byron was worried about him. Mike often joins Byron’s Kiwanis Club chapter for luncheons. They’re buds.

Mike had planned to spend the day with his family, but this was one side trip that needed to be done, he said. That’s Mike, as long as I’ve known him: Sees a need and does what he can.

Seeing them hug in the lobby was, for me, a moment about connections and family, and caring about your fellow human being — all of which describe the Salvage Santa program, which Mike said was upmost in his mind as the past days have unfolded.

We’ve all lived through the horror of the shooting in some way by now, seeing it replayed over and over again on video clips, presented in photos, analyzed in articles and talked about on TV and radio shows. For me, an added weird element is that I attended literally hundreds of meetings in that room, sitting in the media area and watching the podium from the same point of view those videos captured. It’s too easy to put myself in that place.

Indeed, most of us have cycled through the stages of grief over this. Here, it started with disbelief when a meeting in my boss’ office was interrupted with the words, “There’s a gunman in the School Board meeting and shots have been fired.” You know the rest of the story, in which district officials narrowly escaped death and Mike took down the gunman, who then shot himself.

But the story isn’t over yet, as it has affected Mike’s life outside his work. Monday, he’ll oversee a massive toy giveaway to children who are clients of Early Education and Care — the 27th year since he saw a need and did what had to be done.

When I spoke with Mike Friday morning, he looked tired. He said he’d had little sleep, and who could blame him — he’s still being asked to relive those hellish minutes and the final deadly seconds of the confrontation over and over again.

But he also has had to worry about Salvage Santa, which was hurting for support this year. Until Thursday evening, that is, when he went to shop for toys and donors who had seen him in action this week pressed cash and checks into his hands, more than tripling the money with which he had started the evening.

And then Friday, School Board member Ginger Littleton’s famous purse went up for sale on eBay with proceeds to go to Salvage Santa, and Schwinn called to promise him 500 bikes and helmets, and others called to talk about making large donations.

In this season of thanksgiving and hope, that’s about as good an outcome as anyone could ever imagine, and all because Mike did what needed to be done.