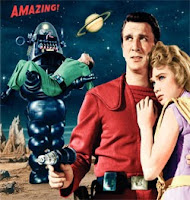 Anne Francis, the actress who first made her mark as "Altaira" (or Alta) in the classic "Forbidden Planet," died Sunday of complications from pancreatic cancer. She was 80. Read the People magazine story here.

We watched Forbidden Planet on Sunday night after all the family visitors had left, not knowing that she had died. I had recorded it from TCM over the weekend. At the time, we talked about her costar, Leslie Nielsen, and what a dashing leading man he made as Capt. J.J. Adams of the United Planets starship C57D, an obvious template for James T. Kirk. Neilsen died Nov. 28 of last year.

As I write this, Francis' official website is down, having been overloaded by visitors. Apparently she had used the site to keep fans updated about her battles with cancer. You might try it later, if you're curious.

She was also Emmy-nominated for her single-season role in 1965 as "Honey West," a noir detective who lost her clothes as she solved murder cases. And you might remember her from her Twilight Zone appearance in "The After Hours," in which the mannequins come alive after a store closes.

You can sign the online guestbook for Francis here.