Photos from the Passing Days

Where have I been? There and back again.

Spent an evening last Tuesday listening to Kathy Patrick tell her story at the Bay County Library, then attended a cocktail party at the home of former Panama City Mayor Gerry Clemons in her honor the next evening. Photos: 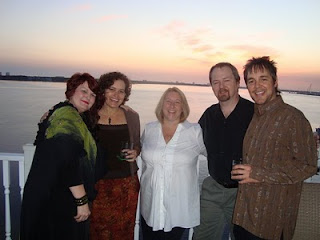 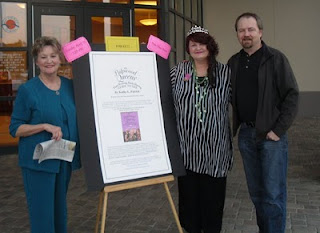 Bettina Meade from the Library, Kathy Patrick and me outside the Library.
Friday, I attended the opening night of Gulf Coast Community College's spring musical, "Guys & Dolls," and worked the Joy Boots booth with Marisa's dad, Charles. We were joined for part of the evening by Berkely Reeves, Debra and Jessica. Photos: 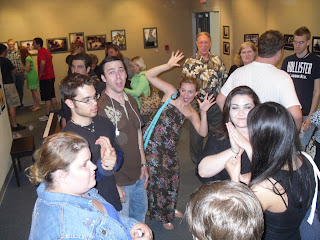 The cast and crew of Guys and Dolls meet the audience after the show.
Center of attention is Kayla Dibble, who portrayed Adelaide. 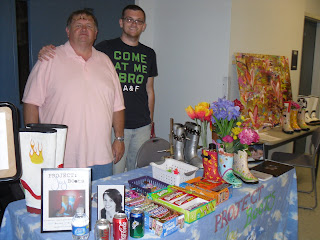 Charles and Berkely doing the good work.
Saturday, I found a treasure or two at the Lynn Haven Good Will store, the best being a copy of "X-Men" No. 29 from February 1967 in very good condition, bagged and boarded. It's the pick of the week: 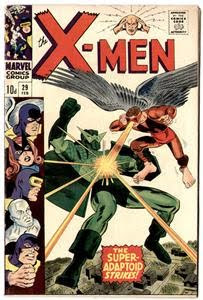 And finally, my friend Brady loaned me a copy of Warren Ellis' "Frankenstein's Womb," which reads like a literary novella, intertwining Mary Wolstoncraft's life and writings with those of her lover and later husband Percy Shelley and Lord Byron, as well as historic records and the works of Mary's parents. Mary finds herself guided through the past and future by the spirit of the Creature, her brainchild, who shows her how her life and imagination brought forth a future of towering skyscrapers and hospitals where the dead are regularly revived by contained bolts of lightning.
A great piece of work, brilliantly written by a master of the comic form and illustrated in moody black and white. It's Today's Pick.
And then...
Today, Michael delivered his newest novel to me in hardback. I already have read the advanced proof, and I've interviewed him for a story about it in this week's Entertainer (I'll link to it later this week). But he wanted me to have it in hardback, which I greatly appreciate, and he wrote a gracious note in the front. Be looking for Thunder Beach soon.