(I wonder how many times she has heard that particular Brady Bunch joke.)
---

Masha Hamilton was a foreign correspondent for The Associated Press in the Middle East for half a decade, then she worked another five years in Moscow as a correspondent for the Los Angeles Times. While in Moscow, she began to dream what she described as “fictional anecdotes.” Eventually, she realized her subconscious was sending her a message. She decided to quit journalism and follow a new path.

She has since authored four novels: Staircase of a Thousand Steps (2001), The Distance Between Us (2004), The Camel Bookmobile (2007) and 31 Hours (2009). She also teaches writing workshops online and in person. She taught one Feb. 5 at FSU-Panama City when she visited for Books Alive.

I had the pleasure of participating in her workshop. And her publicist asked me to give her a lift back to her hotel, during which time she grilled me on the local meth epidemic. Later Friday, during the "get acquainted" gathering for the authors and volunteers, she questioned Sheriff's Office spokeswoman Ruth Corley about the same thing. (That's Ruth, left, and Masha talking in the photo below.) 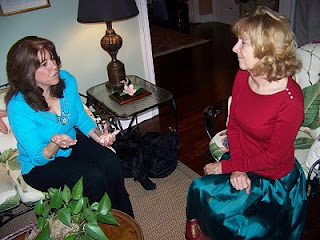 “I am closer to my fictional characters than I am to a lot of people,” she told the small gathering of writers-in-training at FSU that rainy morning. “They have revealed so much to me.”

In turn, Hamilton revealed a few trade secrets to her class. She says the first few lines of a story must make a reader invest in the rest of the tale. An editor friend wading through the slush pile of manuscripts in his office once told her, “I read that first paragraph. If I can put it down, I do.” He had so many pages stacked on and around his desk that every paragraph had to give him a reason to keep reading.

Here are Hamilton’s tips for beginning a new story or setting off on the adventure of writing a novel:

1) Start your story at (or as near as possible to) the moment everything changes for the character, when every-thing is propelled forward.

3) Focus on a character that the reader can care about. “Characters are human. They must be flawed,” she said. In addition, you must know more about your characters than you reveal to the reader. To write realistically about a made-up person, you must give this person depth. Know incidental things like what is in that character’s refrigerator and medicine cabinet. What was his first kiss like? What is his belief about God? How does he handle money? (And so on.)

4) When writing a first draft, don’t over-think it. Don’t self-censor, or second-guess. Don’t let yourself be frozen. “The first draft is a process of exploration,” said Hamilton, who does not write from an outline. “Free write. Don’t stop. Don’t self-edit.”

5) For writing dialogue, Hamilton refers her writing students to Ernest Hemingway’s “Hills Like White Elephants.” Look for subtext in the dialogue, she says. Beginning writers mistakenly have characters say too much, too clearly and with too much exposition, she said.

“Dialogue should reveal character, create mood, push the plot,” she said. “It’s the place to use lies, hyperbole, exaggerations. The best place to use subtext.”

6) At the climax, slow down the action. Don’t rush through it. This is what your readers have been waiting for, after all. Give them all the storytelling you can muster at this point. “You should vary the psychic distance throughout the story, but get very close to the character at a moment of suspense,” she said.

Finally, she had everyone in the room write down three small personal fears they have, and three BIG fears they have. Then take those fears and apply them to a character they are already writing about in one of their projects. This 25-minute writing exercise was supposed to include some physical details and dialogue.

Without revealing what six fears I wrote down, what follows is the narrative I wrote. The point-of-view character is Jonathan Maxwell, the grandfather of my Tom Caliban character. He has just gotten word that his daughter, Rebecca, was in a car accident and is at the hospital. Please recognize that this is a first draft, free written, as Masha said we should do:
----

All the long drive to the hospital, Jon kept imagining the fear and pain Rebecca had suffered. He’d been in one nasty crash several years ago, and he could replay the stop-motion memory of that wreck as if it were happening right now.

Surprise of impact. Tug of belts across his chest and waist. Glass peppering his face. Pain of his head striking the door frame. Vision of glass suspended in air before his eyes like a photograph of sleet as the car shifts to the right at the same speed as the glass flying within it. Glass raining as the car digs in and skips in the dirt shoulder of the road, turns and rolls forward.

What had Becca seen in that hot, frozen instant? What pain seared through her body? Did she lie in her blood and tremble, shake glass from her long black hair? Did she call out for him or Maggie? The thought of her suffering, alone, terrified — it shook him to the soul. He felt helpless before the cold fact of it. Small.

Jon carried a single scar from his wreck, a line of skin sensitive to the touch even decades later. It was hidden by his gray flat-top, but he could find it unerringly and trace it now with one finger as he cried behind the wheel.

He wondered what scars Becca would carry, and whether they would be so easily hidden — or as simple to put a finger on.

Maggie touched his arm and he turned to look at her. Her face was dry.

But Jon suspected that Maggie didn’t know what she was talking about.
----

Wow, wish I could write a second or third "draft" that good!

Masha Hamilton will be my guest on News Talk Online on the Paltalk News Network at 5 PM New York time Tuesday March 9.

To talk to her then please go to www.joinchatnow.com There is no charge.