Glass eyes are the window to Daniel Wallace’s soul — or at least, to his work.

Glass eyes have figured in his work from the beginning, as they figured in his childhood and because so much of his writing is informed by the fables of youth.

When Wallace was in sixth grade and “everybody was new” at his school, he met a kid named Frank. Frank lived nearby, which made them “friends by default,” he said. However, in the heirarchy of coolness at school, Frank was somewhere behind Wallace. Wallace might not have been the most popular kid, but at least he knew Frank would always be the last one picked for teams.

Frank had a glass eye.

It was not, and sometimes Frank and Danny would barely even speak during the operation. Frank would take out the eye, run water over it, dry it and replace it. And they would go back to class.

Today, Wallace wonders whatever became of Frank. He would like Frank to know what an impact he had on young Danny. He wonders if Frank has read any of his books. He has looked for Frank for years, and is baffled that there’s no trace of his old friend on the Internet.

He says he learned many things from Frank, most of which was subconscious at the time. But one thing he learned ties to him being a “visual writer.”

Wallace, 51, has been seriously writing since he was 24. His first book, “Big Fish,” was published when he was 39. The movie version by Tim Burton was a “shocking development,” he said, and while it is very different from the book, he thinks the two have one thing that connects them.

“Imagery. Everything is being held together by images, things that get a story going and hold a story together.” 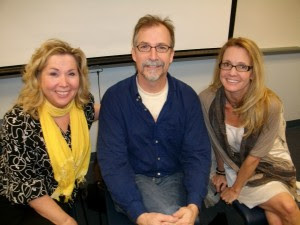 Daniel Wallace poses with Karen Spears Zacharias, left, and Patti Callahan Henry, right, after their afternoon session at Books Alive on Feb. 6. (Photo by me, stolen from KSZ's blog.)
Posted by Unknown at 6:26 PM